Artist’s rendition of a Stryker vehicle with mounted HEL system shoots down UAS. 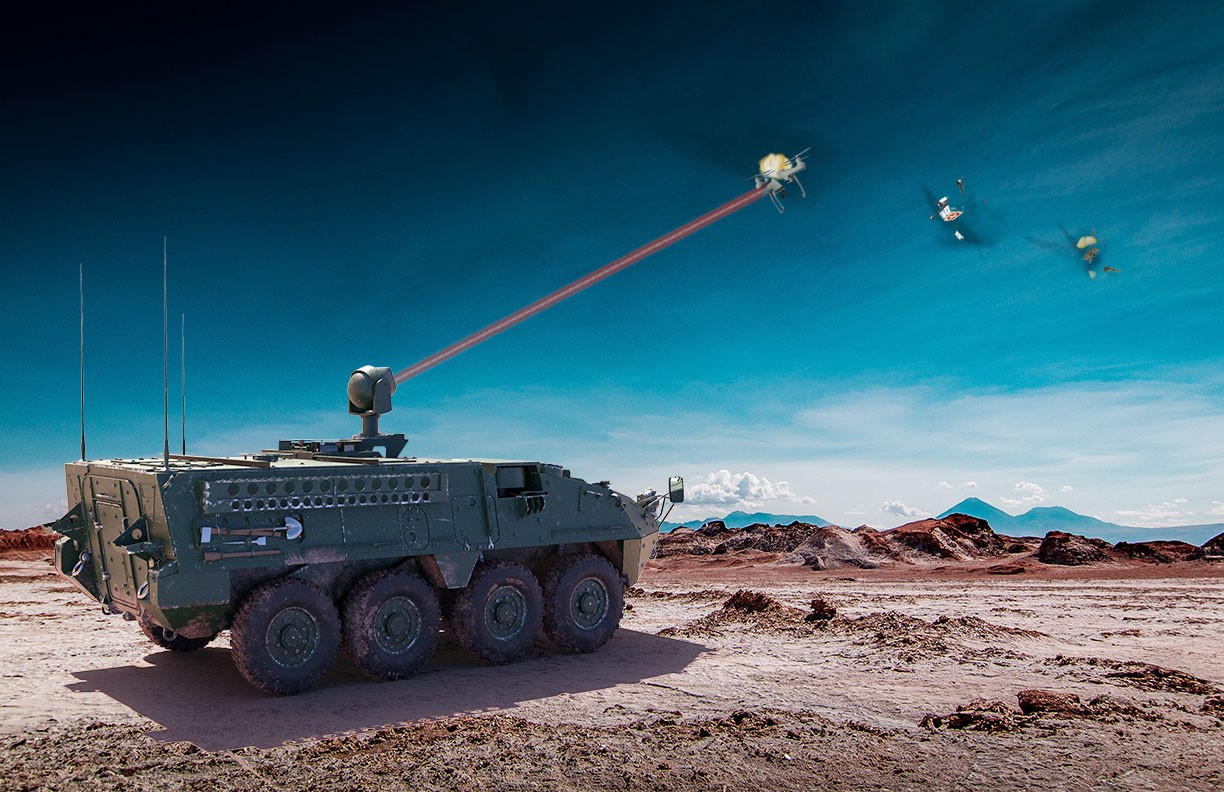 From the ray guns of Flash Gordon and Buck Rogers in the 1920s and 1930s, to a blockbuster moment in the late 1970s with Star Wars and Star Trek, the concept of laser weapons has existed in American popular culture for nearly a century. But taking them from the movie theatre to the theatre of war – from the art of the possible to the art of the practical – has proven to be much more difficult.

The desire to develop high energy laser (HEL) systems for national defense has been around for decades, but why are we now on the verge of actually fielding these technologies? In short, the technology has matured –  and the U.S. military needs it in the midst of a great power competition with near-peer adversaries.

“Significant advancements in both battery and solid-state laser technologies have led to tremendous improvements in size, weight and power, all of which are critical parameters for laser deployment on mobile platforms for the military,” said Wes Freiwald, Vice President, Space Superiority & Missile Defense Division, who oversees all directed energy (DE) programs at Centauri. Centauri was recently acquired by KBR, a global provider of differentiated professional services and solutions within the government and technology sectors.

"Additionally, there is an urgent need to field systems to accurately counter the large volume of evolving threats that the U.S. military is facing – from lowcost-yet-capable small unmanned aircraft systems (UAS) to hypersonic missiles,” Freiwald said.

Engaging at the speed of light

Since contract award, Kord – along with several subcontractors – has been working to integrate 50-kilowatt (kW)-class laser weapon systems on Stryker combat vehicles, in order to deliver a prototype platoon to Soldiers in fiscal year 2022. The use of HELs to defend against UAS and rocket, artillery and mortar threats present a ground-breaking approach to protecting the warfighter.

“We are seeing high volume, high speed threats; threats that try to saturate; threats that come in quick,” said Freiwald. “HELs give our military the ability to deal with these high-speed saturation events by engaging at the speed of light. They also have nearly unlimited depth of magazine, low collateral effects, and the ability to determine effectiveness in real time. This is what makes HELs superior to traditional weapon systems. You don’t fire something and wait, hoping that you were successful – you know in real-time.”

Serving as a system integrator

The team at Kord has been at the forefront of this new wave of laser technology since building the first configuration of the Mobile Experimental High Energy Laser (MEHEL) 5-10-kW-class fiber laser system in 2016.

“From the beginning, we have proven ourselves as being a leading integrator of these complete laser weapon systems,” said Scott Schnorrenberg, General Manager, Kord Technologies.

Understandably, multiple subsystems must work perfectly in tandem to produce a successful HEL system, which needs to be able to identify a threat via radar, target it and generate a laser beam powerful enough to destroy it. Kord’s role as a system integrator is to bring the following technologies together creating a complete system: acquisition, tracking and pointing;  beam compensation; propagation; modeling and simulation; optics; power and thermal management.

“Our continued performance shows we have a unique capability and experts in all of the different facets of directed energy weapons to be able to pull these systems together and provide the software that makes all of these subsystems collectively work as a holistic weapon system,” said Schnorrenberg.

On Sept. 30, 2020, the Kord team completed its fifth milestone of the DE-MSHORAD program, which included integrating the complete laser weapon module with the laser support equipment. The team also conducted hardware-in-the-loop testing to verify everything works together and took measurement of the laser's performance at a high level. The team is on track to fully integrate the two laser weapon modules – one by Raytheon and one by Northrop Grumman – on the Stryker vehicles for testing by the end of the calendar year. Competitive “combat shoot-off” testing will take place at Fort Sill, Oklahoma in 2021, and one module will be selected for prototype production.

“Once a selection is made, we go right into integrating three more complete Strykers for a delivery of four DE-MSHORAD platforms no later than the end of September 2022,” said Schnorrenberg.

The current prototyping – as well as potential future low-rate production – is taking place at Kord’s brand new 25,000 square-foot facility in Huntsville, which provides the necessary space to integrate for the current phase of the program as well as future production. It also features a HEL laboratory that can integrate and test up to 50 kW-class lasers.

“The U.S. Army has designated Redstone Arsenal and the Huntsville community as the directed energy focal point,” said Schnorrenberg. “RCCTO is based out of Redstone, but up until now, the primary facilities that could provide them with the necessary support were not here. We are giving the Army a premier directed energy facility that is right next door. They can just drive around the corner to see what is going on.”

DE-MSHORAD isn’t the only project Kord is working on out of its new Huntsville facility. The team is assisting the U.S. military with other directed-energy experimentation for the counter-drone mission.

“It is our responsibility to meet the needs of our stakeholders to get these systems rapidly and reliably in the field,” said Freiwald. “No excuses.”

This effort was sponsored by the U.S. government under the DoD Ordnance Technology Consortium Other Transaction Agreement (W15QKN-18-9-1008) with the National Armaments Consortium. The U.S. government is authorized to reproduce and distribute reprints for government purposes notwithstanding any copyright notation herein.