After the Punishing Fury of Harvey, the Spirit of ONE KBR Shines Through

Members of KBR's corporate accounting team volunteered their time at the Houston Food Bank in the aftermath of Hurricane Harvey. 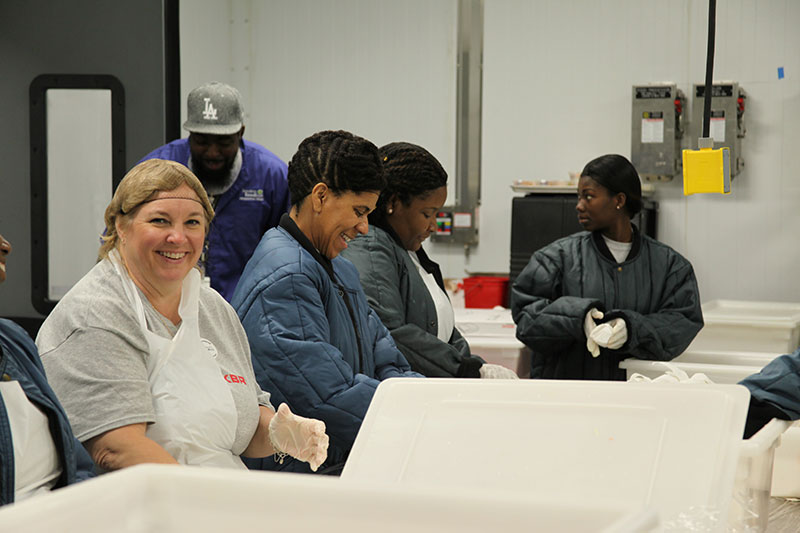 Hurricane Harvey dumped up to 52 inches of floodwaters in parts of Houston and many KBR employees lost everything in the disaster.

KBR's communications department held a bingo fundraiser and sold t-shirts which together raised $11,000 for the KBR Disaster Relief Fund. 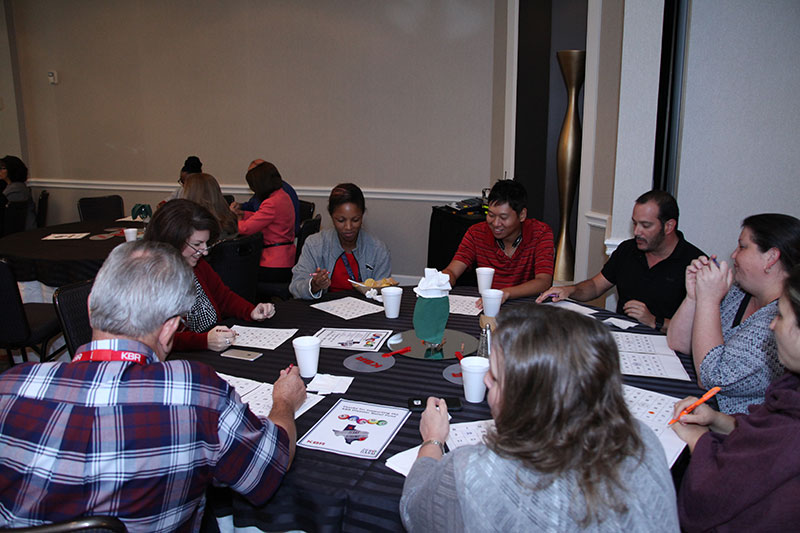 Throughout its history KBR has responded to disasters around the world, delivering solutions to headline-making events from wars to floods and natural disasters.

Then the last week of August, disaster hit home when Hurricane Harvey swept through Houston and the Gulf Coast region. The monster storm dumped up to 52 inches of floodwaters in some areas, leaving devastation in its wake.

KBR immediately went into action, working quickly to identify members of the KBR family directly impacted by the flooding and setting up a disaster response team to provide support for those left reeling from Harvey's destructive force. More than 119 employees had homes that were affected to some degree; 89 of them lost everything.

Through the KBR Charitable Foundation, the KBR Disaster Relief Fund enabled KBR employees to contribute to the relief effort. Leading the donations was KBR. The company contributed $500,000, all of it earmarked to directly benefit members of the KBR family. KBR employees around the world contributed another $100,000 in direct donations and pledges.

"With so many people affected by Hurricane Harvey it was not easy to find assistance. I'm so grateful to KBR for creating and supporting the Disaster Relief Fund. I will never forget the goodness of the people at KBR who donated, both financially and with their PTO. The employees here have become my family in more ways than one. They truly demonstrate the saying: KBR Cares." – KBR Disaster Relief Fund recipient

The impacts of a disaster like Harvey go beyond the loss of homes and possessions. KBR's Employee Assistance Program mobilized to provide counseling and support. People without a place to stay were directed to temporary housing set up at the Whitehall Hotel and corporate apartments through KBR approved vendors. The myKBRhr Benefits home page served as a centralized resource center, continually posting and updating a list of community resources, from information about 401k hardship withdrawals and Federal Credit Union hardship loans, to opportunities to volunteer.

To recover and put a life back together again after a great loss takes time. Throughout every community, KBR employees could be found helping move neighbors to safety and later, spending hours ripping out sheetrock and carpeting from damaged homes. And through the newly formed KBR Federal Disaster Leave Sharing Plan, employees were able to donate some of their accumulated paid time off to fellow employees who were most impacted by the storm and needed extra time to recover and rebuild. At last count, 119 KBR employees had donated 2,205 hours.

"KBR friends donated not only their PTO and financial support, to help us through this challenging time, but their personal time as well. They picked us up and sheltered us after the flooding. They waded through waters to help pull soaked sheetrock and insulation and clean and disinfect the house. Many others supplied us with tools, fans, dehumidifiers, generators, food and even their cars to transport supplies. We are so touched by our KBR family."  – KBR Disaster Relief Fund recipient

In the weeks after Harvey, the number of volunteers at the Houston Food Bank had decreased but food donations were still pouring in and help was needed. Some of KBR's corporate accounting team members saw on the news that the Houston Food Bank was in desperate need of volunteers to prepare and distribute food and decided that this was a cause they could all get behind. On September 21, the day they had chosen to volunteer, it was raining hard, causing minor flooding in some areas. Undeterred the volunteers made their way to the Food Bank warehouse, slipped into their KBR Houston Strong t-shirts and went to work.

After a short orientation the team was divided into two groups. One group was assigned to the cold freezer to prepare chicken wraps and watermelon. The other team was sent to load baskets onto a food truck for delivery.

"We had a great time!" a volunteer reported. "There was a lot of laughter, and talking and singing to the music. We had so much fun we plan to organize volunteer efforts for the group on a quarterly basis."

Three hours later when it was time to leave, the team had cut up 30 watermelons and assembled 2,900 chicken wraps to be distributed to people in need across the city. That day, the KBR corporate accounting team truly lived up to the t-shirts they wore: Houston Strong, KBR Strong.

"At KBR, we value our people," said Stuart Bradie, KBR President and CEO. "From ONE KBR to our ZeroHarm culture, we believe it is our responsibility to look after one another. The response from KBR employees to help those in our KBR family and our communities has been exceptional. But that's the way KBR has always been dating back to our Brown and Root heritage. When challenges arise, on the job or in the world, that's when KBR shines."