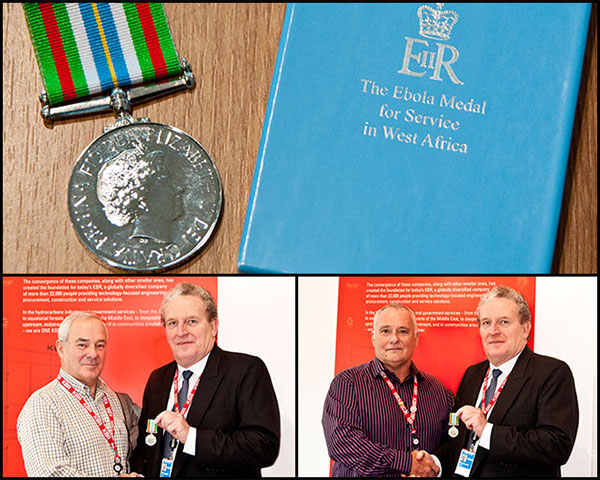 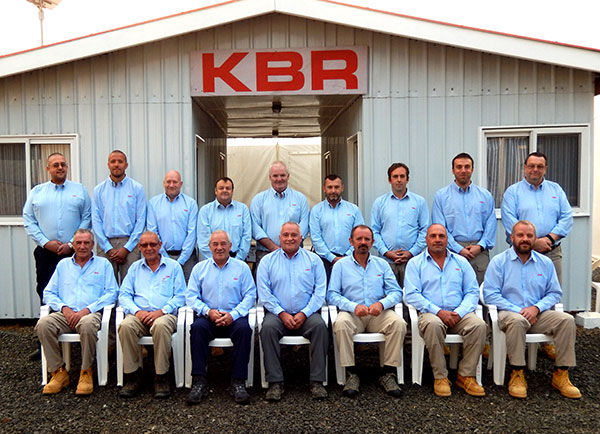 ​The U.K. Government recently presented special medals in recognition of those who contributed outstanding service in support of the humanitarian mission during the Ebola crisis and KBR's Dave Butler and Jon Stewart were among those honored with the award. The Ebola Medal for Service was the first specific medal created by the U.K. Government to recognize individuals for their role in a humanitarian crisis and acknowledged the highly dangerous environment that workers were required to enter.
In response to the Ebola outbreak, the U.K. Government established an Ebola treatment center in Kerry Town, Sierra Leone, designed to accommodate approximately 100 patients. KBR was contracted by the U.K. Department for International Development (DFID) to supply a range of facilities management services at the treatment center.

The first phase of the contract required the deployment of an advance team consisting of a Biological Specialist and a Project Manager within 72 hours of contract award. Phase two involved mobilization of tradesmen and support staff - specifically plumbers, carpenters, electricians, and heating, ventilating, and air conditioning technicians. The main objectives were to set up the security, catering, and transport services for the site while simultaneously setting up communications and transport for the KBR team.

There was immense pressure on every team member to get everything in place as quickly as possible because any delay could lead to the loss of life. KBR's advance team had to work above and beyond the call of duty in order to ensure that KBR's responsibilities were fulfilled for the opening of the Ebola treatment center on the 5th November 2014.

As the Ebola crisis deepened, KBR's initial two month contract was extended to a third month which meant that the KBR team had to operate at the height of the outbreak with no sign that the epidemic was being brought under control. These circumstances made the task of recruiting plumbers, carpenters, and electricians from the U.K. challenging, especially considering the task at hand required that recruits don Personal Protective Equipment (PPE) and carry out maintenance and repair tasks in the highly infected areas known as the Red Zone. However, under the strong leadership of Butler and Stewart, and the HSE and support teams based in Leatherhead, over 150 tasks were carried out in the infected area without a recordable incident or accident.

As the Biological Specialist on the team, Butler was responsible for writing the operational procedures for the team. "We approached the training and work with the seriousness this disease demands and maintained a rigid decontamination and 'no touch' policy which allowed our team to fully support the doctors and nurses and successfully carry out the tasks while staying healthy," said Butler.

Unfortunately, other organizations operating on the site had individuals contract Ebola during the effort. These infections served as a constant reminder of the ever present threat during the KBR team's deployment. Daily temperatures reached around 38°C/100°F accompanied by around 98% humidity which made carrying out maintenance and repair tasks in non-air-conditioned buildings difficult. This challenge was compounded by having to wear PPE which increased the working temperature significantly and restricted actual working time to around 20 minutes. These factors required the team to meticulously plan ahead, including details like prepositioning all tools and materials, in order to maximize the working time.

The Kerry Town site provided unique challenges for the KBR team to operate in, however, they overcame these challenges and their efforts were essential to the ultimate success of the Ebola humanitarian mission. Through their work, KBR was able to provide the water, electricity, and continual infrastructure maintenance that allowed the site to operate and minimized the risk of everyone involved.

Some of the KBR team's main achievements during the deployment were:Completed 102 days of work (20,000 man hours) at the height of the Ebola crisis without injury, incident or infection;Carried out in excess of 450 maintenance and repair tasks including 150 in the Red Zone;Managed a workforce of over 120 expatriates and local Sierra Leoneans consisting of caterers, tradesmen, and security staff;Managed the transportation of over 300 locals on various routes between Freetown and the Ebola Treatment Center on a 24/7 basis; andProvided over 21,000 hot local menu meals (eight varieties) on site 24/7.

Dave Butler and Jon Stewart were given their medals in February of this year at the KBR office in Leatherhead. KBR's Richard Card, Vice President Operations, who presented the awards, admired the high degree of safety in the dangerous work KBR carried out and was pleased to recognize the first class support from Butler, Stewart, and the rest of the KBR team who ensured all the correct protocols for safe working at all times were in place and proven to be effective.
"I am very proud of these KBR employees who were willing to put their own lives at risk to help others in the height of the Ebola crisis. Their assistance was invaluable. It was certainly a great honor to present these medals to these outstanding KBR employees," said Card.